You can display the Full post on your Blog Page

We are so proud to announce the new Hasbro Transformers x Tokyo Direct collaboration!

Read the interview with Acky Bright!

Q: How would you describe your art style?

A: I started off doing graffiti. I didn’t major in art when I was in school, and self-taught myself how to draw. When I was young, I would be imagining something, and then grab a pencil and paper to start doodling. I would doodle on the back of pamphlets or inside my text books. My drawings got better as I went, and then before I knew it, I became a pro artist. (laughs) It’s not much of an answer, but I can’t put a label on my art style because I always just end up drawing in a style that I think makes the picture look the best, rather than following specific rules.

Q: Who are your influences? Do you have a favorite artist?

A: I can’t even begin to limit how many artists have influenced me. There are so many. Other than famous artists, I’m also influenced by smaller creators who are still making a name for themselves. So, rather than just having a single influence or favorite, I’m inspired by all these great artists that I come across, and want to learn from all of them.

Q: How did you approach the Optimus Prime artwork? What do you feel your unique art style brought to the character?

A: First off, I had to keep in mind that this wasn’t another piece of fan art I was drawing, but an official piece. Because of that, I couldn’t just put whatever style I wanted, but made sure to go back and study all the past designs that existed, and took those silhouettes and parts, then integrated my style into them to create an “Acky version Optimus Prime” that would make fans happy. I drew him freehand rather than using set artistic rules, which allowed me to express Optimus Prime as a living creature rather than a machine. By the way, the pose he’s in was inspired by kabuki theater where his front hands are open.

Q: Who’s your favorite Transformers character? And why?

A: I love Optimus Prime. I also love the Decepticons and Starscream. In other words, I love all of them. (laughs)

I’ve loved Transformers since I was a kid, and got very excited while watching the live-action movies. I want to go back to my younger self, and show him that I’m a part of this project!

Manga Livepainter SHINNOSUKE UCHIDA (内田慎之介) drew over 300 pieces of art for this debut music video of “Sally Show” by new group VEHEMENT, in association with one of the top musicians and rappers in Asia “M.C. Itsuka.” Co-produced by Itsuka and Tokyo Direct. Editing by the genius Satoru Ohno (THINKR).

Concept is a revolving image that evolves and develops two main characters who will keep re-appearing as Vehement grows. 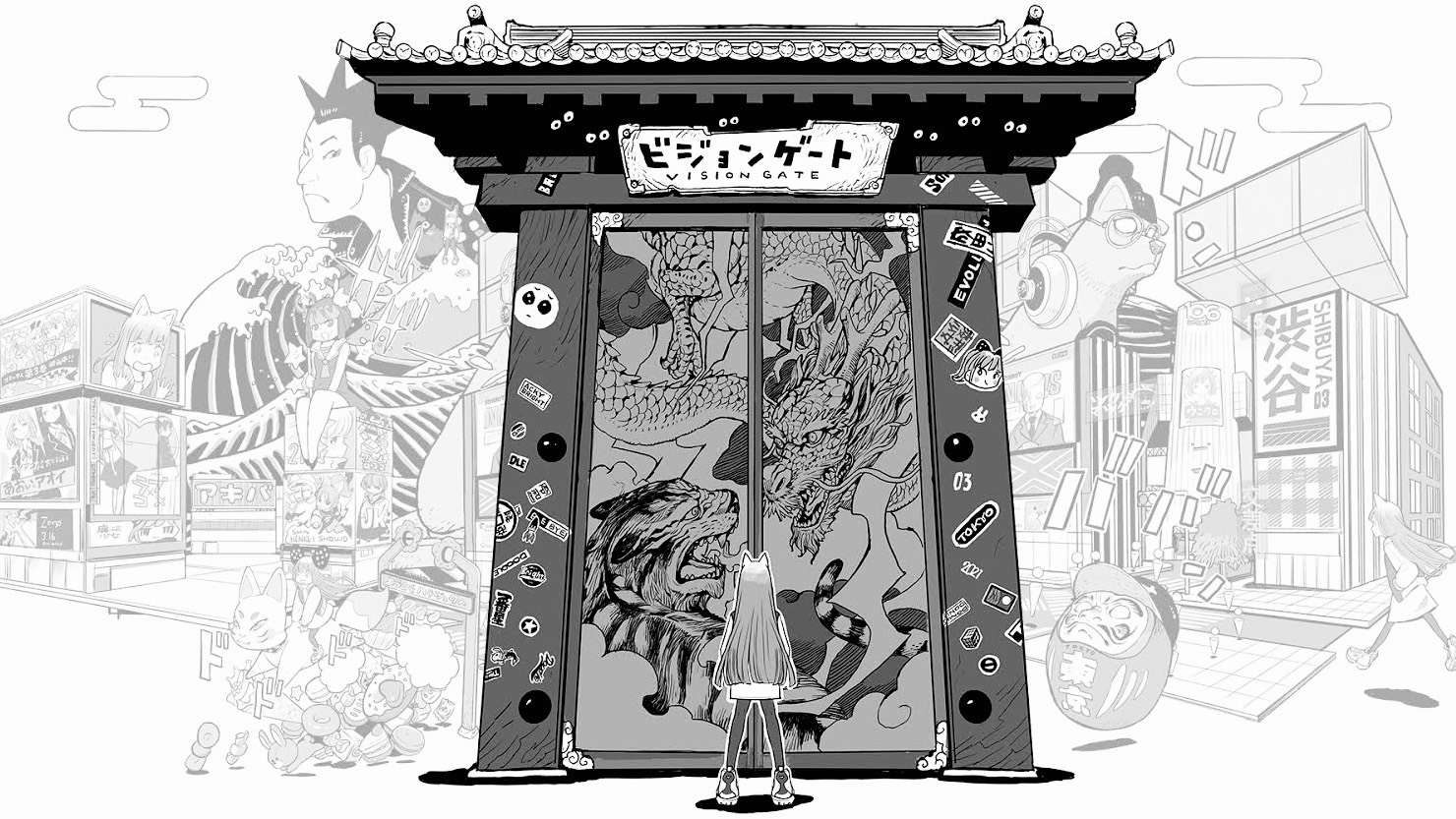 Acky Bright is one of the brightest stars in the firmament of manga, the distinctive brand of Japanese comics. He grew up steeped in its sources and inspiration, feeding his own talent with a steady diet of golden-age manga and anime, graffiti, live-action movies, and international pop culture. His quick drawings and live paint performances are demonstrations this unique form of visual expression, traditionally in black and white, and dynamic inside and outside the drawing frame. For VISION GATE, he has chosen to give us flashes of the city that awaits travelers outside of this airport.

Shibuya, the evolving cyber city. Harajuku, ground zero of the pop culture. Akihabara, area where you can feel and be lost into the world of anime. In the contrast, many historical areas without much changes in hundreds of years since the Edo period still exist. Tokyo is truly a city of juxtapositions, where the tradition and innovation meet and coexist. I created this work using the format of a traditional picture scrolls such as “Choju-giga (Frolicking Animals)”, which said to be the origin of manga, and combined with the modern manga techniques. Also I’ve used portable tablet for my drawings and mixed them in the videography so that I could merge the concept of “tradition and innovation” to present the city of Tokyo. Welcome to Theme Park Tokyo.

Check out the interview with CRIMSON15!

Q: How would you describe your art style?

A: My art style is to draw things that could exist in everyday life, but don’t; settings that have a small different from our everyday world. It’s not a very good example, but my drawings all depend on my surroundings and feelings at the time. Like, when I draw something cool looking or something “kawaii,” it’s usually due to a movie I saw or book I read that day. I have fun whether I’m drawing something realistic, or something in a chibi style.

When I began drawing, I wanted to have a realistic style. But when I became a professional, and started to get more work, I thought that rather than being bound to a single art style, it’ll be good to be able to draw in many styles. Being able to try my hand in various styles has helped me grow as an artist.

Even when I’m drawing something that I like, I use my imagination to change it in some way. Thanks to that, it’s become my style to try various styles of art.

Q: Who are your influences? Do you have a favorite artist?

A: When I was in my middle-school art class, I always felt an affinity for art that would change in appearance depending on the time of day and weather, like Claude Monet’s “Rouen Catherdral” or “Haystacks.” I’ve since been using water colors when I draw, and always keep the idea of passing time in mind even when I draw the same character or backgrounds multiple times.

When I’m drawing digitally, I like to draw characters from manga, anime, and games. I’m a big fan of manga. I especially love the dark world setting of “Dorohedoro” by Q Hayashida, or the various character designs that appear in “One Piece” by Eiichiro Oda, and take a lot of inspiration from them.

For American comics, I’ve read a lot of X-Men stories. I’ve been inspired by the illustrations and comic-style movie posters drawn by Mark Brooks, and the monster and human designs by my fellow Japanese illustrator Sana Takeda.

In the end, I want my art style to have a motif where the approach and look changes as time passes, and have different stories to tell by looking at them.

Q: What video games have you worked on? What your favorite part about working on video games?

A: I’ve worked on app games for CyberAgent Group, BandaiNamco Entertainment, and others. I’ve overseen designs for enemy character and monsters, items, and backgrounds. The thing I enjoy most about being a Game Art Designer is that you can create a large world in just a short amount of time, and with a limited number of people. If you’re just by yourself creating something, the world your creating becomes limited. I like the style in a game company where lots of ideas are shared everyday in creating a world. I get inspired everyday by the new discoveries there.

I’m also happy when my ideas or illustrations get used in a game, and the players enjoy playing them.

Q: How has your work in video games influenced your art style?

A: I touched on this briefly earlier, but I’ve started to have a story in my mind for all of my drawings. When I was a student, I used to often draw things that had my interests in them. When I became a Game Art Designer, the way I draw my illustrations went from something only I would see, to something many people would see. I’ve also become aware of the colors I use, the movements of characters, the lighting when I draw which depend on perspective.

Like other artists, a single drawing I make is a process of trial and error. That’s why I’m always happy when people see my art, and they end up talking about it and have different emotions towards it.

Q: How did you approach the Bumblebee artwork? What do you feel your unique art style brought to the character?

A: Firstly, I made sure not to stray from Bumblebee’s characterization and his yellow color. My theme this time around was “Japanese,” so I thought about taking a robot, and placing him in Japanese samurai armor. Then there’s the female character in my drawing. Bumblebee’s character has always been that he’s able to make human friends easily. I thought the female character I drew could be his human partner like in the shows and movies.

For the drawing’s aesthetic, I used water color, which is what I often use during my live-painting events. Bumblebee’s mechanical yellow and the natural pink of cherry blossoms mixed very well, and ended up transforming into a very Japanese feel.

Q: Who’s your favorite Transformers character? And why?

A: I love Bumblebee’s comical style, and how he’s always friendly towards humans!

I also watched the various Transformers shows, and love Starscream. He plays the part of an underling, but he’s always trying to place himself as the new leader. It’s funny how he always seems to fail, but is always forgiven. (laughs) He’s seems to be the most evil of the Decepticons, but has the most charisma of them, and is always a series regular.

He’s the opposite of Bumblebee, and adds another layer to the series that viewers can enjoy.