From artist Acky Bright of Brightworks comes a DLE (Dream Link Entertainment) and Tokyo Direct co-production. A manga about kawaii transforming girls who are weapons of the government, used to fight terrorism but who start to emerge as individualist people like humans, leading their handlers to reassess the potential dangers of “living weapons.”

“Shin” means new in Japanese. This is SHIN HENKEI SHOUJO due to a previous DLE IP called simply Henkei Shoujo (Transforming Girls) that began as a short animation series, racking up millions of views and then producing one manga book.

Acky Bright is a Japanese artist whose resume includes crafting a “cool Japan” variant of Optimus Prime for Hasbro’s Transformers, creating a MoMA-curated moving illustration exhibited at Narita and Haneda airports in Japan to welcome those for the 2021 Olympic Games, a months-long manga (Heroes of Rivalry) drawn for BMW’s League of Legends collaboration, several solo exhibitions produced by entities such as Parco in Japan and a few top-secret big-name IP art projects – with more to come!

Acky Bright’s star keeps rising and this is why we believe this first batch of NFTs, from the hand-drawn artwork of his first long-term manga series, are valuable and will appreciate in value over time as his accomplishments grow.

This NFT collection exists with a purpose, and that is to ensure the completion of the SHIN HENKEI SHOUJO manga. The producers and artist embarked on a risky plan to release new artwork and story (in Japanese, English and Spanish to start) with the aim of completing book #1 in 6-8 months time. This means zero income until after a book can be published (also no guarantee of outcome). Since NFT’s have become a potential way for artists to support their projects, this selection and these releases are a form of crowdfunding or “paid social networking” for the artist/writer/producers of the series. If it does well, the manga continues.

We thank everyone for supporting the series!

For the SHIN HENKEI SHOUJO manga NFT series, the original manga pages have been augmented into a motion comic, with original elements such as voice, music, lighting and sound effects added to create a very unique set of art properties.

The production team have started off making limited runs of 4 types of NFTs. MANGA PAGES, STILL IMAGES, TIME LAPSE and KEY ART. Each one has a different level of rarity but all are quite rare. These first images are in very limited quantity, and later drops will keep adding new, original pages to the selection as well as different, unique bundles. Our goal is to please collectors and fans and we will move forward with that as our top aim.

WHAT IS AN NFT?

It stands for “Non-Fungible Token” and is a next level in how fans and investors collect and trade items. These assets exist in the growing world of digital assets. They represent real-world objects like art, music, in-game items and videos. Bought and sold online (mostly with cryptocurrency), they are encoded with the same underlying software as most cryptos, making them verifiably unique.

Although NFT’s have existed since 2014 they have gained notoriety during 2018-2021 and became an increasingly popular way to buy and sell digital artwork. About $180 million has been spent on NFT’s since November of 2017.

NFT’s are part of a larger, growing realm of authenticated original items that live on a blockchain. The world of crypto in 2021 is now large enough to require zero traditional funding such as from banks or venture capital.

The NFT market was haywire for a while but over the next few years there will be a refining of the process and products. While some predict a bubble, most are looking at this as here to stay for a long time.

Our perspective is that people have always collected and they will continue to do so with this new medium. The increase in gamification in our world exponentially expands by the month, lending validity to this method of collecting. 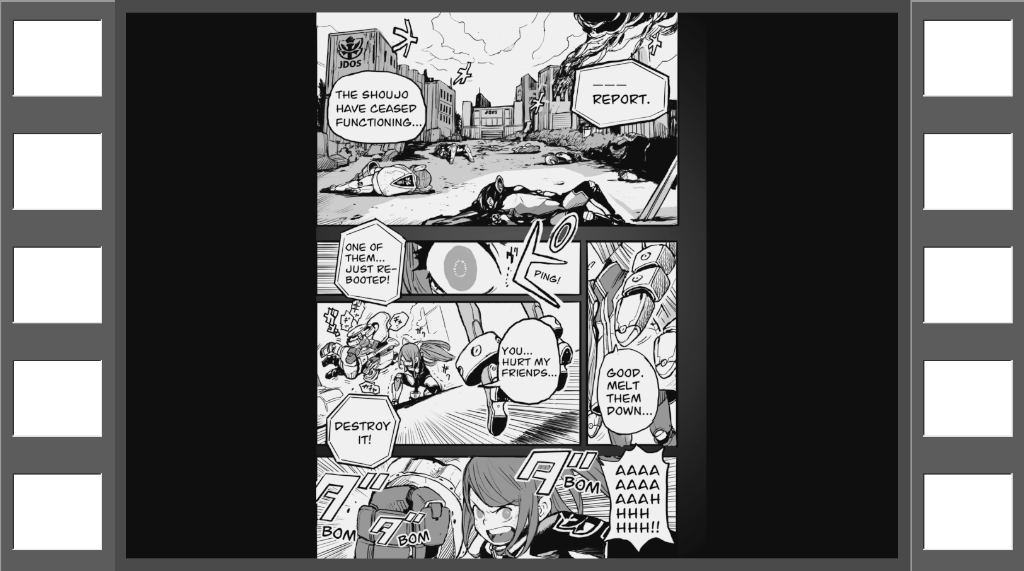 This is the first page of Shin Henkei Shoujo manga ever drawn by artist Acky Bright. The purpose is to display a scene that is unknown in time, but quickly conveys that our heroes (who we have not yet met) have been beaten by a powerful enemy and are presumed “dead.” Read more 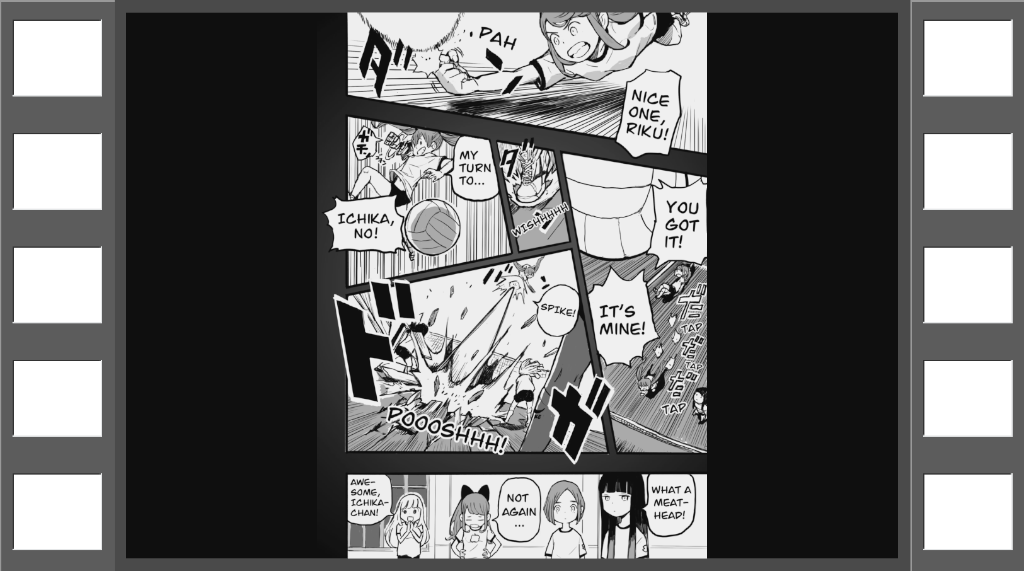 On this page, the first panel is meant to connect to the last panel of the previous page. Previously, the same character, RIKU, is attacking an enemy in battle mode with her big fist, but in this first panel, she is hitting a volleyball in a school gym with her non-transformed hand in a gym outfit. This is meant to convey the Shoujo live a double life. Read more 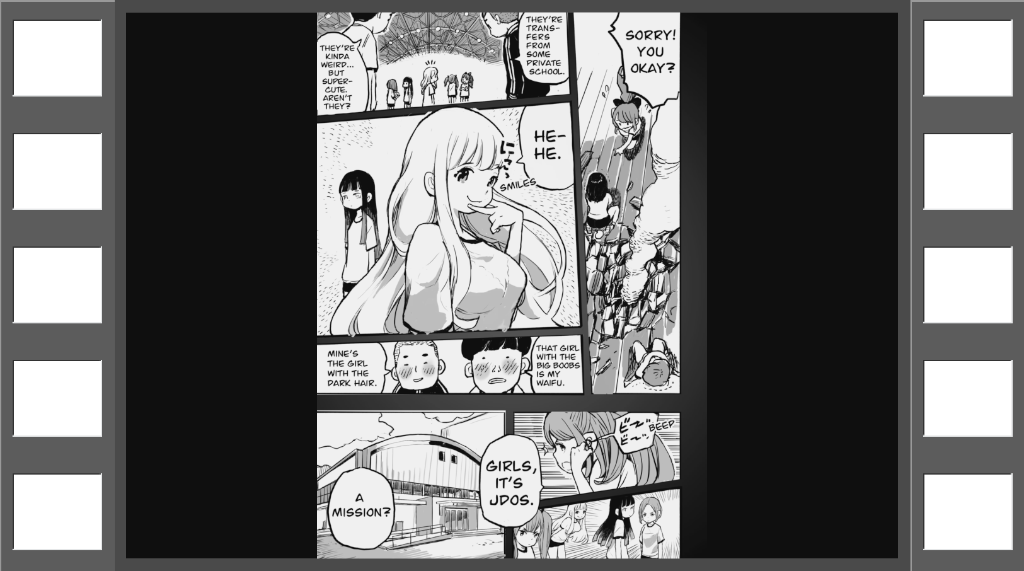 On this page, panel one shows Riku checking on the shellshocked other students who cannot understand what just happened. (Ichika hit the volleyball with such force that it exploded through the floor.) Read more

On this page the characters’ personalities are combined with the first time reveal of the vehicles they transform into. Riku is trying to keep the girls in line by telling them to “keep it stealthy.” This is because they are supposed to be respecting the secrecy around their very existence. They are elite machines that nobody knows about except the inner circle. Read more

This page shows Riku taking Sara to task as the girls continue to transform blatantly in the open while their very existence is supposed to be top secret. Why is Sara on a roof? It becomes obvious when her transforming vehicle is revealed to be a helicopter. Riku pretty much gives up and transforms into her cute jet, taking off to follow them. Read more 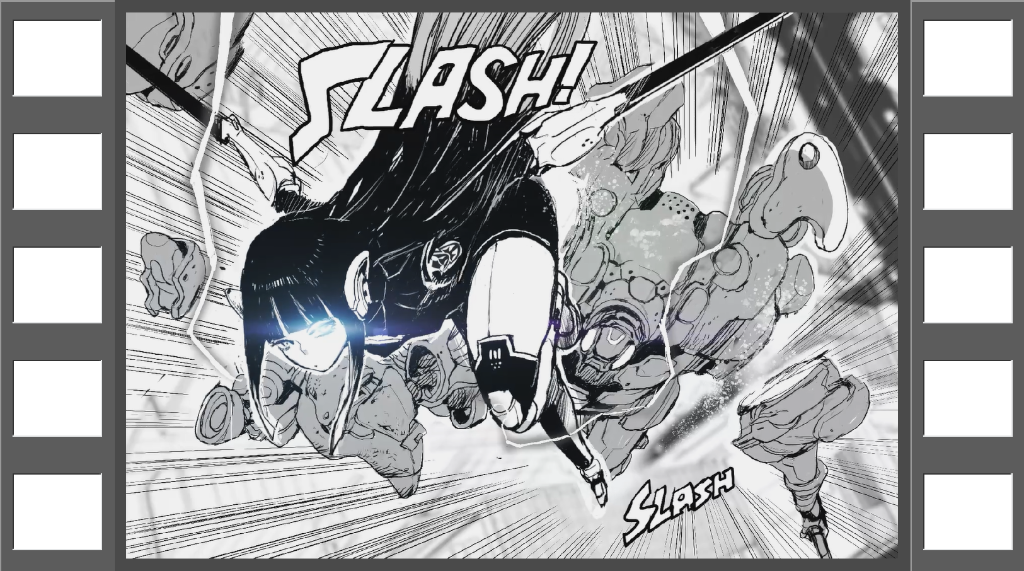 This still image depicts the character of SARA who transforms into a helicopter. Her “battle mode” uses blades (later used to fly). She is seen here in an action pose just after cutting a large robot into pieces. This original artwork by Acky Bright is part of the ongoing SHIN HENKEI SHOUJO project that forms a manga and several stand-out illustrations of the individual characters. Read more 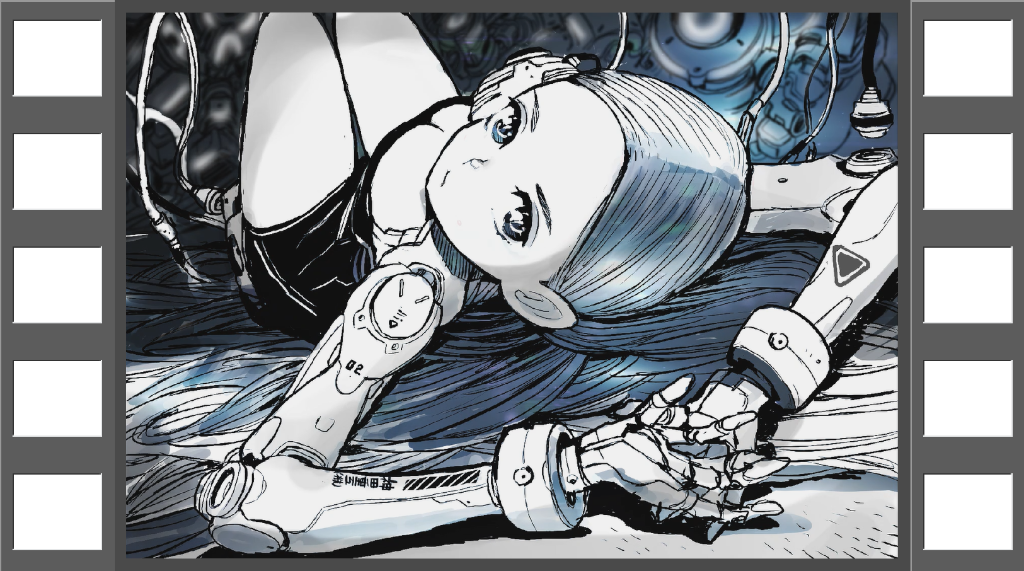 This still image is a hand-drawn piece of promotional artwork, a prototype for the future characters, symbolically representing “robot girls,” lying in repose with cyber elements surrounding her. She is in half robot form, which is a favorite art setting for artist Acky Bright. This original artwork is part of the ongoing SHIN HENKEI SHOUJO project that forms a manga and several stand-out illustrations of individual characters. Read more 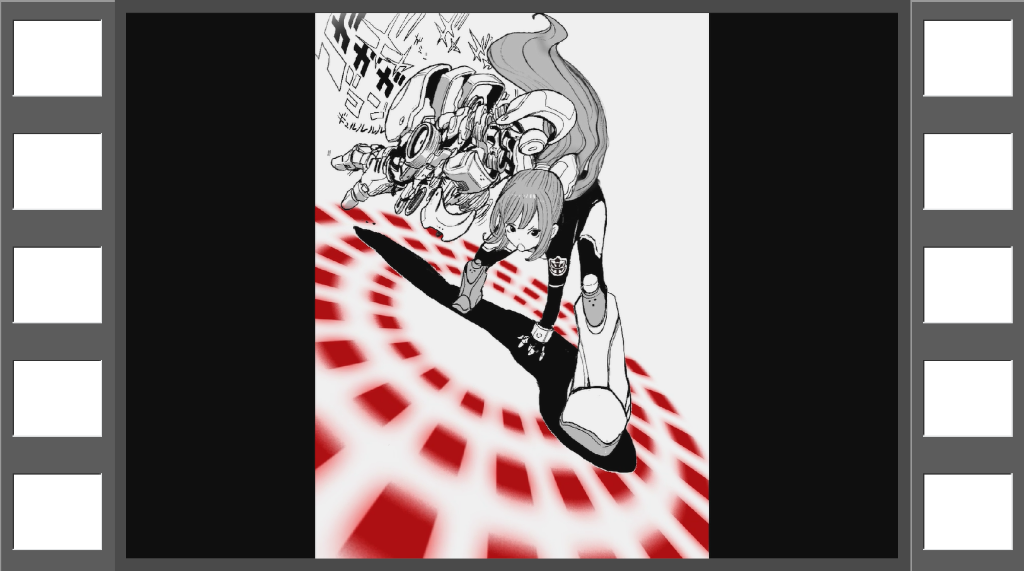 This still image is a piece of promotional artwork hand-drawn by manga artist Acky Bright, showing leader character RIKU in the midst of transforming from schoolgirl to “battle mode” with her huge fist. The myriad details are indicative of Acky Bright’s favorite drawing style. The moving pattern represents the complexity of Riku’s programming while RED is her signature color. Read more 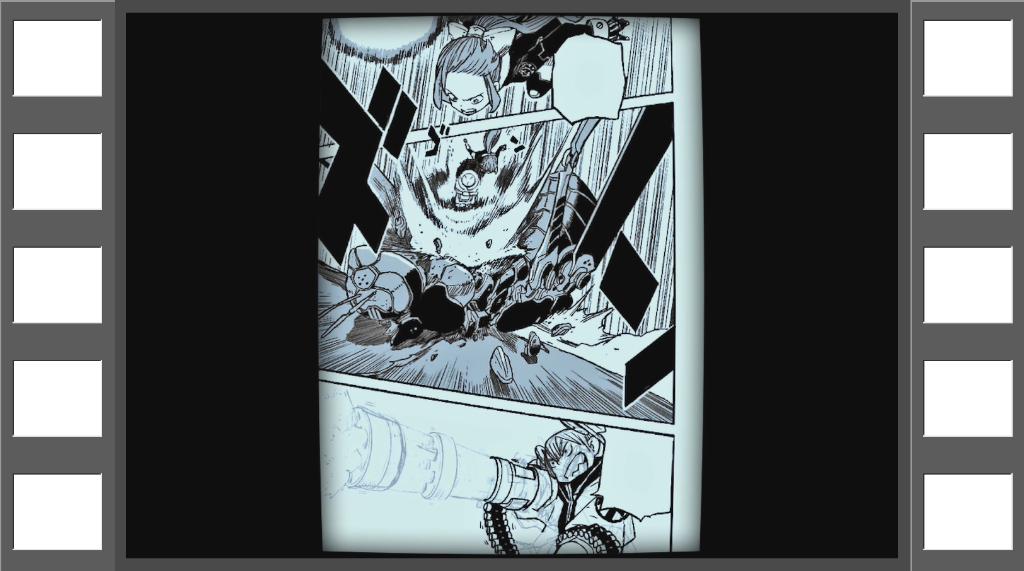 This rare time lapse shows the creative drawing process of artist Acky Bright. On this page, the character RIKU attacks a large robot with her big “battle mode” fist. The middle panel shows her at the top coming down like a ton of bricks on the unfortunate machine, smashing it to pieces. The bottom frame shows the wild card character of ICHIKA letting loose a barrage of firepower from her “battle mode” gatling gun. Read more 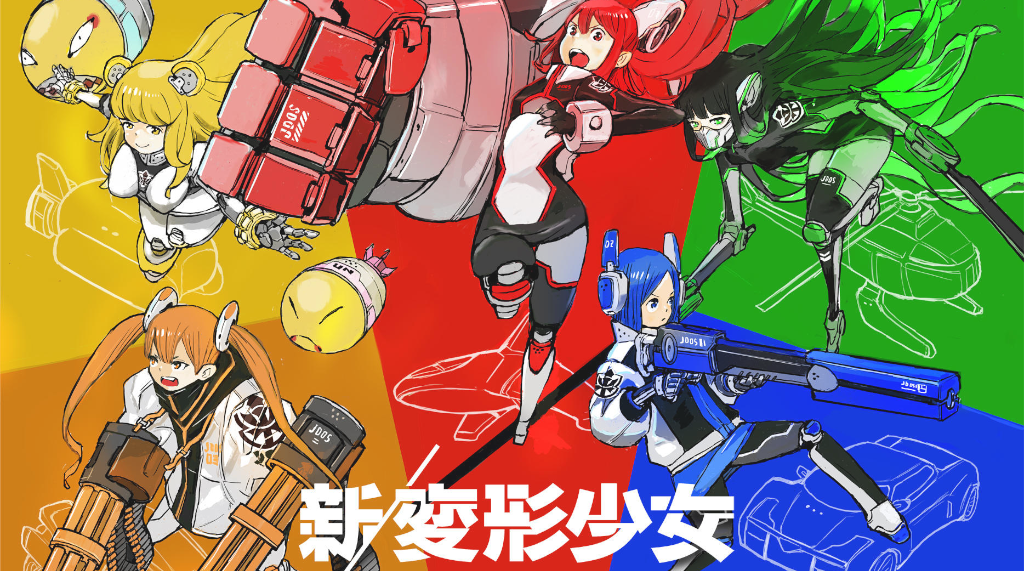 SHS Key Visual #1 was the first official piece of artwork by Acky Bright to announce the reboot of this exciting manga series. It is the first time that the all-new, original characters were revealed along with their associated colors, their “battle mode” form and their ultimate vehicles, traced in white behind them. Read more